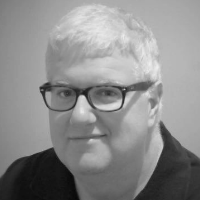 Louis: As someone who has been focused on relational programming, I don’t really care about cloud or on-premises, my hope is that they both work close to the same. What I hope is that in 5 years from now, when I type a query such as the following, or maybe a lot more complex with 100s of joins, aggregations, etc:

That it runs fast, stable, and gives me the right answer no matter how many rows are returned. If we design the structures like relational theory prescribes, using the relational engine, I don’t want to have to do much more than create the tables and define the constraints that match my requirements. Edgar Codd’s vision that he outlined in his rules (written in 1985, no less), was that we separate the physical work of indexing, hardware choice, etc. from the logical work. I want to get to that day where stuff just works, and answers the customer’s questions in an easy fashion.

I think my biggest question is when will technology outpace the consumer’s desire to store more and more data. 20 years ago, we had data needs that would have needed no optimization using today’s hardware. Now we want to store everything about everyone, all the time. Eventually one of them has to reach some limit, right?

Louis: It already has been, somewhat.

Realistically, I don’t see the DBA vanishing as a role, just changing more and more. The original role of DBA is long gone. And I think it kind of changes every year or so. The technology is getting more and more complex, doing more and more every release of SQL Server. All of these new technologies they keep adding (R, Python, and Graph, most recently) need someone to support them.

Back in the day, a DBA could just hide out in the office, and make sure that data was backed up and restorable and things were great. SQL Server used to just be a simple relational engine, and now it takes as long to decide what parts of the product to install as it does to install it. Security was much different also. A great percentage of companies were not really hackable because data was not connected to the Internet, and often we were generally too paranoid to store personal information in the first place. Now I know that my personal information is stored and accessible on the same network where you can watch unlimited cat videos.

Cloud/hybrid solutions are making things easier for the DBA, in that you can offload some of the daily maintenance, someone needs to be able to configures the systems? And when they fail, who fixes them?

Louis: Tough question, because I never really think too much about successes or accomplishments. I have always just enjoyed what I do for a living, and doing it as a hobby has been great.

Probably the thing that gives me the most pride is when someone comes up to me at a conference and tells me that I taught them something that stuck with them, or inspired them to get involved. Admittedly, receiving the MVP Award is my greatest honor, but it was never my primary goal, and while it can be a motivator, it certainly isn’t why I keep writing and speaking.

Louis: Reading. I once joked that I had written more books in a year than I had read. This is still generally the case. The last book I read (ok, listened to someone else read to me) was the book “Tarkin”, which was a great Star Wars book that chronicled Governor Tarkin’s rise to power before meeting his demise on Death Star 1.0. That and a New Dawn: Star Wars, which was an origin story for some of the characters from the Rebels TV series. (Yes, I am a bit of a Star Wars fan.)

When I read a technical book, it is often as a technical editor, mostly because there is only so much time in the day. I have been slowly reading Expert SQL Server In-Memory OLTP by Dmitri Korotkevitch, which is excellent, and a topic I am very interested in (full disclosure I was given the book by our shared editor, but I only say nice things if I really mean it.).

Louis: I suggest that anyone who is just getting started should try everything they can. My first job was a LAN administrator (Novell!), and I tried procedural programming in college and did a little of it professionally. I didn’t love either (and have only basic skills configuring my home network these days.)  I happened into being a SQL programmer when a coworker quit and we needed lots of stored procedures and triggers written. I loved it and didn’t look back.

So best case for your career: figure out what sticks, and more importantly, what it is you love to do. And if you don’t love anything technical, don’t do it even if you are good at it.

As you mention, I personally went the specialist route. I have had the same job (database programmer/architect) for 15 contiguous years, and I don’t regret one moment. I spend most of my time on SQL Server’s relational engine, designing databases and coding in T-SQL; both in my day job, and here at my desk most nights. The deep knowledge I have cultivated is useful to solve the more complex problems that come up, and knowing the most about something makes you valuable to an organization.

Being 100% specialist can be career limiting also. I am a member of a small team, so I could never just design databases all day. Or just write T-SQL. In order to fit in on a modern team, you may need to have skills in other areas. Amongst the other stuff I do, I build a lot of SSIS packages and am staring to work with PowerShell some.

I think the most important thing is that every technologist should strived to be at least adequate in the things that they do. Not everyone will write books, or even blogs (heck, some people will have non-technical stuff they work on). But if you sell your services to a company, you should be giving them at least what you are advertising you can provide.