Yay!! SQL Server on Windows Containers! Hey wait a minute, I thought you could already install Docker Desktop on Windows? Yes, but behind the scenes, Docker uses HyperV to create a Linux VM (called MobyLinuxVM). So even though it was on a Windows machine, it still used a Linux VM on the backend.

This is primarily for dev/test environments. This is in no way production ready. Think about a developer asking for a SQL instance so that they can run their code against, etc. You can now easily, and quickly, spin up a container running SQL Server. Once they are done, you can remove it or stop it.

This blog post will show you how to install SQL Server using Windows Containers.

Note: Prerequisite is that you are running Windows 10 on 1809, build 17763 or higher. You can check by running systeminfo at the command line and looking for “OS Version”. Minimum of 6 GB of disk space and 2 GB of RAM

First, you will need to install Docker Desktop for Windows.

Once you have that installed, right click the tray icon and choose, “Switch to Windows Containers” see image below. 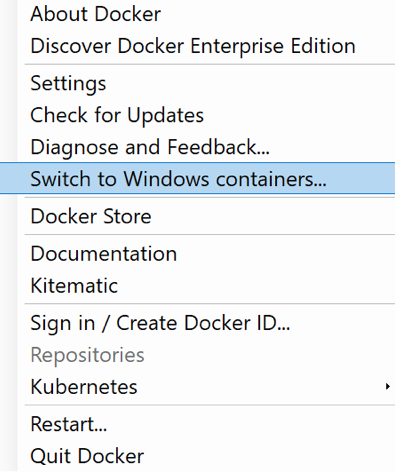 Now that you have it switched to Windows containers, open up Powershell (Run as admin) and pull down the SQL Server image by running the command below:

Once the image is downloaded you can run it with the following command:

After that is successfully executed, you can open up Azure Data Studio (or SSMS), and connect to ‘localhost’ using your sa login. Enjoy!

5 Replies to “How To Install SQL Server On Windows Containers”